The Role of the State in Economic Growth in East Asia

The Role of the State in Economic Growth in East Asia 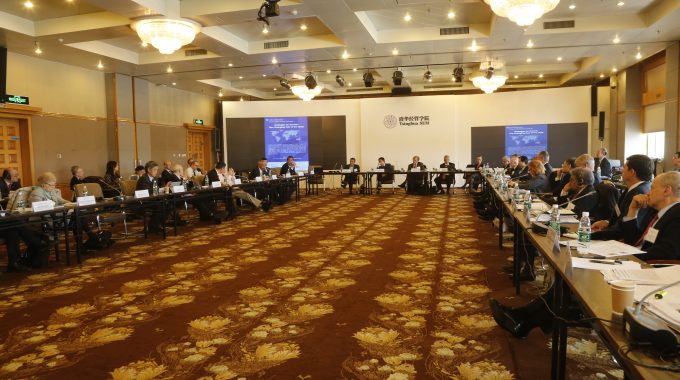 IPD in collaboration with Tsinghua University and as part of Columbia University President's Global Innovation Fund, the Center on Global Economic Governance (CGEG) is conducting policy-oriented research into Strategies for Growth: The Changing Role of the State. This three-year project is being undertaken in collaboration with the Columbia Global Centers | Europe (Paris), East Asia (Beijing), and Latin America (Rio de Janeiro). The first major event of the project was a roundtable conference in Paris on October 5-6, 2014. The second major event is the following roundtable conference in Beijing. Its goal is to build on the discussion in Paris and examine major issues in the Asian context, with a particular focus on China.

Motivation: Almost a decade after the onset of the US Financial Crisis leading to the Great Recession, the world is once again facing the possibility of a global slowdown – even before we had returned to real prosperity. Economic rebound from the recession has been weak and some key problems are even more complicated now than they were before – increased banking concentration, increased inequality, increased concentration of CO2 in the atmosphere, and gridlock in the reform of the global system of governance. Questions arise as to how the global economy could be “reset” to avoid long-term stagnation; What can individual countries, China in particular, do? What can Asia as a region do? How do we achieve more global cooperation?

On March 18th, 2016 the Center on Global Economic Governance (CGEG), in cooperation with the Columbia Global Centers|East Asia, the Initiative for Policy Dialogue and the Tsinghua University Schools of Economics and Public Policy, held the Role of the State in Economic Growth Conference in Beijing, China at Tsinghua University.

The first conference session focused on monetary policy, capital flows and capital market regulation and was chaired by David Li, Mansfield Freeman Chair Professor of Economics and Director of the Tsinghua University Center for China in the World Economy. Pascal Blanqué, Chief Investment Officer of Amundi Asset Management led off the first session and focused on investment opportunities and challenges in relation to Asia. He noted that, while the ‘new normal’ for investing in the West is now somewhat delineated, the parameters for emerging markets remain unclear. China, in particular, has many challenges ahead, including developing credible policies to attract investment, including price regulation and other legal norms, as well as new monetary and fiscal policies and rebalancing the service and industrial sectors. He remains optimistic on China for long-term investing opportunities.

Martin Feldstein and Boris Vujcic focused on the U.S. Federal Reserve interest rate policy and its effects on emerging markets. Both agreed that the Fed should have started its rate hikes earlier, but also agreed that the Fed had been successful in normalizing unemployment in the U.S. Others in the session pointed out, however, that the Fed’s delay in raising rates had been a source of stability for China and other emerging markets. Participants also discussed China’s monetary, exchange rate and capital market policies. Some argued for more exchange rate regulation, while others encouraged a more natural float. All tended to agree however, that China should focus on one policy, rather than trying to manage multiple policies at the same time with limited resources. Several other roundtable participants then joined into the ensuing discussion. Joseph Stiglitz commented, “The notion that exchange rates are market determined is a fiction, as governments set rates and regulate investment. If China engages in more domestic investment, foreign assets will depreciate. The degree of enforcement of regulation will determine the scenario.”

The second session was on Stabilization, Industrial Policy & Reforms, Environment and Income Inequality and was chaired by Chong-En Bai, Associate Dean and Chairman of the Economics Department at Tsinghua University. In his introduction to the session, Professor Bai noted that, the session would discuss two main issues that are central for China and which sometimes compete against each other: short-term growth strategies and sustainable improvement of welfare. Professor Bai pointed out that, “China has made important improvements in welfare already, for example reducing inequality, improvements in the service sectors and decreasing rural/urban gap on social indicators. However the questions remain on what should be the driving force of the economy in order to achieve fast short-term growth but also growth based on welfare improvements for the long run? What could be efficiency improvement, now that GDP is not growing as fast, since 2008?”

Initial intervenors in the session included Gerard Roland (Berkeley), Michael Spence (NYU), Shang-Jin Wei of the Asian Development Bank, and CGEG’s Jan Svejnar. The speakers covered a plethora of issues, including the tension between the Communist Party and the private sector, transparency and the rule of law, market competition and creative destruction, and the role of the state in promoting innovation, reallocation of workers, resilience and efficiency. Michael Spence pointed out that, “the state has a clear role in equalizing market outcomes in order to reduce inequality. Keeping dynamics and efficiency of the economy while still aiming at more equal results is the challenge, and this requires more innovation.” Some of the speakers were more optimistic on China’s industrial reform than others. Jan Svejnar, for example, asserted, “Overall I am optimistic, given the history of China over the last 40 years where so much has been gained, but there is need for significant restructuring towards the private sector (for competition and innovation etc.) especially in improvement for capital allocation in the private sector.”

Following the second session, the Roundtable broke briefly for lunch, followed by the luncheon keynote address by Joseph Stiglitz, and discussion by Edmund Phelps. Professor Stiglitz spoke on The Role of the State in the Next Stage of China's Development, very clearly conceptualizing the issues at hand. He summarized, “The question of the role of state is very contextual, changing in countries and over time. In China, the issues are the environment, extent of inequality, dread of instability, market volatility, urban congestion, lack of confidence in product safety, importance of education, health, problems posed by age decline and creating an innovative economy. These are the central problems facing China and in each of these the state will have to play a central role.”

In his discussion, Edmund Phelps, countered that we must be careful in giving the state too large a role. He posited that the private sector is underestimated, and that many of the interventions by the state in China have led to massive failures, such as subsidies to low-wage workers and efforts to subsidize environmental protection, which have not been cost-effective. “The problem with a big emphasis on the public sector, is that it is not foresighted and is a long way from making a convincing case for concrete well-specified interventions.”

After the luncheon keynote and discussion, the Roundtable moved directly into the third session, on Education, R&D and Convergence, chaired by Xue Lan, Dean of the School of Public Policy and Management at Tsinghua University. Dean Xue kicked off the conversation with the question, “If we want the government to address market failures while at the same time improving the institutions… what is the reform that is needed? What should be the next round of government reforms?”

The session included initial interventions by Peter Jungen, Lawrence Lau, Akbar Noman and Martin Wolf. All agreed that more attention must be focused on improving education, innovation and entrepreneurship in China. Peter Jungen launched a comparison with Europe, saying, “Europe can be a model of what not to do. Europe is right now reducing social spending, increasing pensionable age, reducing unemployment benefits - all this because of fiscal adjustment reforms.” He asserted that China must go in the other direction, and focus on job creation and innovation, saying “the problem is not that China is losing jobs but rather that it is not creating more jobs… promoting entrepreneurship is needed… encouraging startups, for example.” The discussion also included suggestions from participants on how China can improve education and increase spending on research and development so as to further converge to developed country economies.

The fourth and final session was on Global Economic Governance -- New Models, New Institutions, and was led by Merit E. Janow, Dean of the School of International and Public Affairs, Columbia University. Dean Janow noted that there have been intense debates on the recent formation of new institutions, such as the New Development Bank, the Asian Infrastructure Investment Bank and the Silk Road Fund. She emphasized that we are now seeing a number of emerging markets joining forces with developed markets in cooperation on development projects, and encouraged participants to consider the goals of China through these newly created institutions, and what opportunities exist in this evolving landscape.

The participants generally welcomed these new institutions, noting their positive influence on infrastructure and growth prospects in neighboring Asian countries and in other parts of the world. Shang-Jin Wei of the Asian Development Bank also noted that there have already been cases in which the institutions are partnering with existing development institutions, such as the World Bank and Asian Development Bank, a positive sign that China is taking on a collaborative stance, rather than a unilateral approach.

Several participants also welcomed the new institutions as vehicles for addressing climate change through investment in clean energy. Echoing this sentiment, Jeffrey Sachs asserted that, “These new institutions should be vehicles for transferring high savings into sustainable high investment globally, through quality of investment.” Participants agreed that much more discussion is warranted on this topic, and SIPA hopes to take it up again in future forums.

In conclusion, Marcos Troyjo, Co-Director of the BRICLab at SIPA’s Center on Global Economic Governance, commented on the topic of transition, which had come up several times in the conference over the course of the day. He sees China, and more generally Asia, in a period of transformation, rather than only transition, into a driving force for the global economy, and welcomes these new institutions as leaders in this transformation.

CGEG will reconvene the Role of the State conference for its third iteration in Rio de Janeiro in late 2016. We look forward to continuing this discussion with you then.